I threatened you with an avalanche of owls. They’re coming. But not quite yet. They don’t have anywhere to sit. Fear not. I’m on it. They can sit in one of these, in a few centuries time;

It will be well worth the wait. Look at those fine, spreading branches!

That, good people, is a Leadwood tree. A  combretum imberbe. And on that hopelessly slim pretext, I’m going to tell you all about it. It is, if you’re into that sort of thing, a genuinely remarkable tree. Even if you’re not it is, as trees go, pretty interesting.

There are lots of different types of combretum down in the Lowveld. So many, in fact, that there is a particular type of vegetation named after them. Combretum Veld. The Leadwood is their god-emperor. Compared to the others, it’s huge, about 20 metres tall, which is unusual in the Lowveld. But what makes it interesting, as you may have gathered from the name, is its wood.

And what wood it is. It weighs 1235 kg per cubic metre. Water weighs 1000. Leadwood sinks in water. It does so because the wood contains a huge amount of silica. Sand. It takes years for a tree to accumulate that much silica. The Leadwood grows incredibly slowly. but it lives for a very long time. Leadwoods regularly live to over a thousand years. 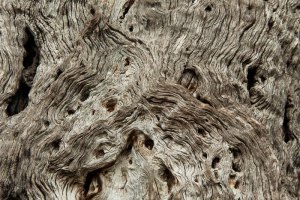 Few people know that silicone implants are actually harvested from the Leadwood tree.

But, as far as those owls, and other birds with a keen interest in looking picturesque are concerned, it is after it dies that the Leadwood comes into its own. Most dead trees rot and fall over pretty quickly. A dead Leadwood can remain standing for nearly a century. And dead trees are good for owls. And Eagles. And Vultures. Owls hide away in dense cover all day, hidden from the birds which will mob them and harry them mercilessly the moment they are spotted. But come night time, they have a very different set of needs.

Some owls, like barn owls, hunt on the wing, quartering the sky along an imaginary grid. Others need somewhere to perch. Somewhere open, unobscured by leaves and with clear lines of sight and hearing. Somewhere, over and above that, that won’t be falling down any time soon. So here you go; 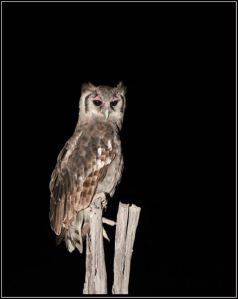 It’s not just owls that have these needs. Eagles do, too;

Hullo. What is up with you?

You might think that those are some pretty cool bird photos. They are, but it’s not the birds that make them cool. It’s the tree. There is something sculptural about a dead Leadwood. Something skeletal. They look pretty cool during the day; 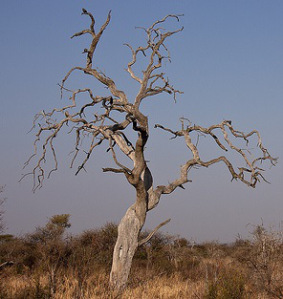 And really dramatic against a clear blue sky; 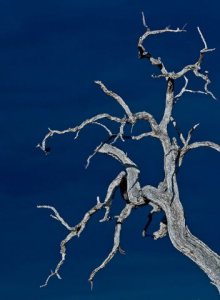 But it is at sunset that they really come into their own;

But I promised you “interesting”, not “pretty”, so here goes;

The amount of silica in Leadwood influences everything about it. First of all, it makes it incredibly strong. Before metal became widely available, it was used to make implements like hoes. Its strength also lets it stand up to these; 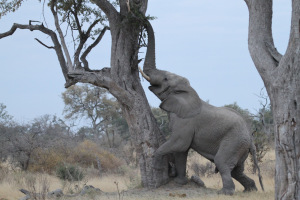 No, it’s not just there for a closer look.

Elephants are staggeringly destructive, especially when they are overpopulating an area, which, believe it or not, is happening down in the Lowveld. Elephants can casually knock down really big trees that are hundreds of years old. But not Leadwoods. They can, however, pull down fairly big branches. Which is great. For us.

Leadwood is, if you ask any self-respecting South African, the single best wood in the world for making fires with. The Afrikaans name is Hardekool, which means “hard coal”. The coals take ages to break down into ash, and they stay red hot forever. It is not at all unusual to make a Leadwood fire one night, and be able to start it again the next by throwing on some more wood and blowing on it a few times. 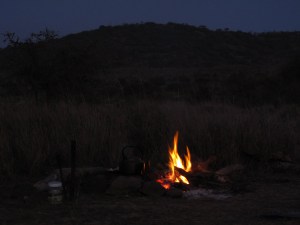 Leadwood has also been measured as having three times the ambience of ordinary woods.

Once it has broken down to ash, it still has its uses. A whitewash is made out of the ash and painted on houses, and almost every ranger that has taken me out into the bush has told me that if I’m ever stranded out in the wild I can  use the ash as a toothpaste substitute. This is one of the most useful pieces of information I have ever been told. I can just picture the scene.

There I am. Lost. An endless sea of browns and greens surrounds me. I’m thirsty. I’m going to need water soon. But how will I find it? That can be a problem for later. There are wild animals around. I’ll need shelter. Later. Food. Later. I cannot panic. I need to get my priorities right. All these things can be taken care of once I’ve dealt with the big issue: How the hell am I going to brush my teeth? 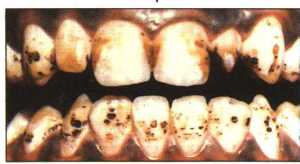 Don’t panic! Think, man! There must be something you can do!

We used to kill Leadwoods for firewood. What’s a thousand years of growth when you can cook a really good steak? But now they are protected. Sort of.

You see, it lasts so long that dead Leadwood is as important to the environment as live Leadwood. Things have evolved to live in it and on it. But every time a branch or dead trunk hits the ground, someone whips it off to use it to heat up some coffee.

Leadwood should at least be safe from the carpenters of the world. It’s very, very hard to work with. Literally. All that silica blunts saws and woodworking tools in no time. But we are nothing if not a perverse species. Since it is so very hard to work with, people are now using it to make furniture;

But it’s worth having, because it took a thousand years to grow.

It is, luckily, a fairly limited market. There simply aren’t that many people out there with that much money and that little taste. So hopefully, our owls will have somewhere picturesque to sit for a little while longer, and if they don’t, we’ll get some really cool coffee tables in exchange.

2 Responses to The Leadwood.